I can't believe they're not jeans!

Continuing with our blast from the past photo jam, I've dug up a couple of classics from our one of our costume fittings during DANFORTH. My character, Soula, required jeggings - which I tentatively purchased from Ardenes on Young Street one day. I was partially embarrassed by the purchase and hoped the cashier would understand that I was buying not one but two pairs of jeggings (buy one, get one free!!!) for non-serious reasons based on my sarcastic facial expressions. At the same time though, secretly, I was quite intrigued by the pants I had mocked so often. As I left the store and started walking towards the subway, a homeless youth invited me to "drink in the park" with him because he thought I looked "sad". I politely declined and thought to myself, "how could anyone who just purchased jeggings be sad?!".
Once I tried them on at rehearsal, a certain transformation occurred. Not only did Soula become more three dimensional...but a much larger, internal change happened within my soul; I became a jegging lover! They were so comfortable! Hugged the booty just right! And they look like real jeans - despite the pockets and seams being painted on! Eureka! Myself, a confirmed jegging hater, had stepped into the best of both worlds in the form of one amazing pant. The comfort and support of leggings with the style of jeans. How did I ever doubt them? It was then that Becca told me she believed these costume jeggings would find their way into my every day wardrobe...and she was right. I started wearing them to rehearsal, claiming they were "rehearsal jeggings". Soon I started wearing them at home as well and eventually I even wore them to work! Just this past weekend I was getting ready to go downtown and was in too much of a hurry to dig through my laundry for clean pants...so, that's right. I wore my DANFORTH jeggings out on a Friday night. No one ever suspected they weren't real jeans!
It should also be mentioned the rest of Soula's costume came from my actual wardrobe. The leopard print shirt is something I legitimately wore (with pride) in high school. The black hooker boots and pink pumps are mistakes I made in first year at Bishop's - everyone experiments in university!
- Erin 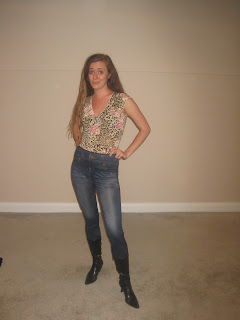 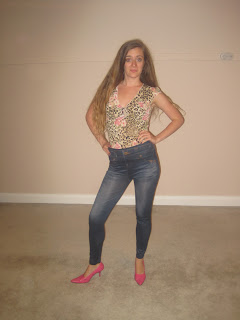 Posted by Black Tea Productions at 20:18